“For even the best-intentioned Western social theorists and colonial administrators, difference meant inferiority.”
- Michael Adas, "Contested Hegemony: The Great War and the Afro-Asian Assault on the Civilizing Mission Ideology" in Journal of World History, Volume 15, No. 1 (March 2004), p. 33

I'll just cut to the chase: after I tell strangers (scholars and non-scholars alike) that I look at the history of African American classical musicians, that I collect their names and dates like how other people collect baseball cards, they usually ask me this one question: "Why are there so few black people in classical music today?"

I usually respond by asking them why they think they might not have heard of any famous black classical musicians before, deceased or living. What kinds of histories get told and which ones are more difficult for us to hear about?  I usually name drop Marian Anderson about now (people have at least heard of her before in American history) and then give a few contemporary examples of working musicians (church organists, conductors, violinists, opera singers, etc.).

Oftentimes, though, people who ask that question already think they know the answer to it.
The problem, implied or explicitly stated: African Americans don't appreciate classical music (said point blank). They only listen to rap and hip-hop, which are terrible. Also, because they're poor, they lack the ability to afford violins, pianos, etc.
The solution: bring classical music to poor, urban (coded for black, of course) neighborhoods in the inner city.

After a conversation with a colleague a few weeks back, I finally realized why this "Groundhog Day" experience that I find myself in every couple of months is so frustrating:
1. People are operating under the assumption that all black people are poor. And yes, there's obviously a relationship between race and class in this country which I don't want to deny and instead wish to condemn. But you know what? There are middle-class and upper-class African Americans out there. And perhaps some of them also don't listen to classical music. What about them?
2. People are espousing the civilizing mission.

Moreover - and here's the kicker - it justified European imperialists' claims for invading different regions around the world. These different indigenous peoples obviously can't govern themselves, Europeans argued. Their need for our civilization is too great for us to stand by and let them wallow in their own stupidity.

His definition of the civilizing mission is really clear and also broad enough for us to consider how classical music can fit into it:
"The 'civilizing mission' is a special kind of belief with, sometimes, practical consequences. It includes the self-proclaimed right and duty to propagate and actively introduce one's norms and institutions to other peoples and societies, based upon a firm conviction of the inherent superiority and higher legitimacy of one's own collective way of life. Note that the 'mission' here is not restricted to the spreading of a religious faith. It denotes a comprehensive Selbstbewusstsein, a general propensity to universalize the Self." (Osterhammel, "Europe, the 'West,' and the Civilizing Mission, p. 8)

The problem with the civilizer, Osterhammel writes, is that the civilizer thinks he's being generous. The civilizer thinks he's helping. On top of that, the civilizer believes that what he has to offer is so great, so universally good and whole, that as soon as the "less fortunates" receive his gifts, they will immediately be overwhelmed by their beauty, majesty, power, and might, see the error in their ways, and join the light side of the force, so to speak.

The civilizer goes in to the mission field not recognizing that perhaps other people see (or in this case, hear) things differently. It's not that the civilizer doesn't tolerate resistance, Osterhammel writes, it's that he doesn't expect to find any.

But here's the ultimate problem, the boomerang effect, the catch-22 with all of this. The problem, Osterhammel argues, is that when these civilizing missions fail - and they regularly do fail - the civilizer turns to racism and other nefarious ideologies to explain why things didn't work out. "The only possible explanation for missionary failure (in the eyes of the civilizer)," Osterhammel writes, "is the given and unalterable inability of people in need of civilizing to open their hearts and minds to the benefits of a supposedly higher form of human existence." (Osterhammel, "Europe, the 'West,' and the Civilizing Mission, p. 31).

And students in history classes read historical accounts all the time that illustrate this. Lines like, "The Chinese as a people are inherently incapable of accepting our Western civilization due to their capricious, mischievous, and untrustworthy nature." Ugh.

So how does this relate to classical music? Many lovers of classical music see it in spiritual, nearly religious terms, almost like an ideology.  They argue that classical music is universal and that it's inherently superior to all other forms of music. They'll say, we need to bring this music to the ignorant masses, who, once they see the error of their ways, will become better people (morally, intellectually, culturally, etc). Historical examples here abound, but one that might resonate quickly is the Workers' Symphony Concert Series in Vienna in the early 20th century. Designed to bring high art music to the lower classes, the series' proponents (Schoenberg, Webern, et. al.) believed they were doing a public good. 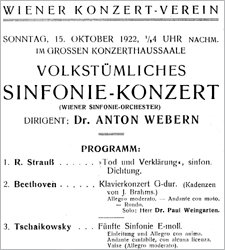 They believed they were doing a public good, though, because the organizers of this series didn't value the kinds of music working-class Viennese men and women were listening to and playing (popular music and entertainment music). The organizers believed they deserved better (Beethoven).

Hopefully it's easy to see how us practitioners, lovers, promoters, consumers, and producers of classical music can start preaching the same civilizing missionary rhetoric if we're not careful. Taking on the role of civilizer in our societies, we can reinforce long-standing musical hierarchies and pit different genres of music against each other.

I believe in the power and beauty of classical music. I turn to historical musical works from the Western tradition to unburden my grief in times of profound sadness. I turn to this body of music to express my joy and triumphs, too. In a truly Romantic way, I sometimes feel like I am communing with the Universe on a deep and profound level when I sing in choir, when I go to a concert, or when I play the piano at home.

But I am more aware now than I was at age 18 that my musical experiences are not universal. And I've also become more aware of how much damage and destruction has been created in classical music's name - precisely because people saw it as universal, transcendental, and inherently better and more beautiful than anything else.

Maybe the point isn't to make everyone listen to western art music -- the assumption here being that that's the only way listeners are going to have any kind of profound musical experience. The goal might be to make sure that people are having meaningful and transformative experiences however they can, in whatever musical language they speak. Maybe the goal is to encourage everyone to sing better in their own key to their own music, whatever it sounds like at the time.

Does classical music belong in African American communities?  That's a silly question because western art music has been part of African American history and culture for centuries (which in turn begs the question, why do we constantly forget this? Why do we constantly erase this history from memory?). But so have other and different forms of music-making. And, to bring back Michael Adas's line in the opening of this blog post, let's not mistake difference for inferiority.
Posted by Kira at 6:14 AM